For hundreds of years the cats found in the cities and farms of the British Isles were of robust type with round eyes and faces and short, thick, water-repellent coats of all colors. They were valued first for their great hunting prowess, but as their peaceful, confident personality was discovered, they became desired companions and took their place within the home. Not until the late l800s were any attempts made to breed these cats for type, color or to maintain a pedigree. Mr. Jung, who later became a noted shorthair judge, wrote: "if the British cat could be thoughtfully bred, there would grow a race of cats bearing aristocratic pedigrees, as a result they would become popular and wanted." 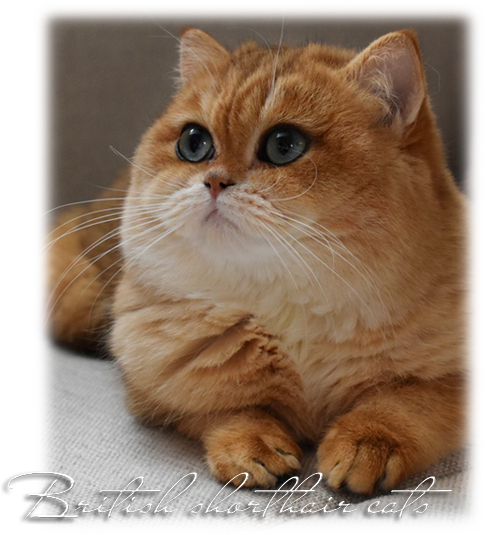 British kittens are large and vigorous at birth. Litters average 4-5 kittens with the queens giving birth easily. Mothers are loving and attentive but still willing to spend time with their humans while the kittens are young. Eyes usually open in less than a week and kittens show interest in solid foods as early as 3 weeks. The kittens are very attached to mom and will continue to seek her out for love and food as long as allowed. Other British in the household eagerly help with the kittens. British Shorthair kittens put on weight fast staying round but not fat through kittenhood. Adolescence, though, can be quite discouraging for the exhibitor, with Brits going through many growth spurts and probably being at their worst just as they enter the adult classes. British Shorthairs mature very slowly, not reaching their peak until nearly 5 years of age. (The British system of judging would be very favorable for judging these mature cats at their best. In this system, these fully developed breeding cats are judged at their bench rather than being carried up to 4 rings per day to cages previously occupied by other sexually mature cats.) For this reason, the truly mature British Shorthairs are rarely seen in the Championship classes and never in large quantities. Because this breed does mature late, they look good for many years and are long lived.

Like the British Shorthair is known for its health and vigor. The breed is cobby in design—compact and powerful with a round, massive face and head. This head design sets the breed apart from other breeds developed from domestic shorthairs. A very dense, short, resilient coat is important in the show British Shorthair. The fur feels solid to the touch—like sinking your fingers into firm, warm velvet. The coat is not double-coated or woolly, which makes up-keep easier; however, regular grooming is important. Although blue is the most common, the British Shorthair comes in a variety of colors and patterns.